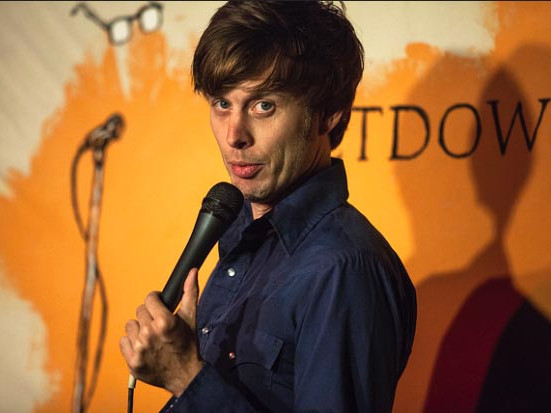 A decade into his standup career, Steve Gillespie moved from Minneapolis to LA, recently made an appearance on Conan, and released his critically acclaimed second album, Alive on State, which reached #1 on the iTunes charts. Prior to that, this gentleman degenerate spent most of his life traveling the country regaling audiences with his delightful self-destruction.

Gillespie’s act is a slaphappy balance of aggression and absurdity, coupled with a delightfully pushy persona and coarse yet effective word choice. His hilarious self– flagellation and blistering social commentary has also earned him spots on Fox’s Laughs as well as the Bridgetown Comedy Festival and the Boston Comedy Festival. He was a finalist in CMT’s Next Big Comic, a runner up for Best of the Midwest at Gilda’s Laughfest, and his debut album Stever Fever from Rooftop Comedy was named a top– 10 comedy album of the year by ComedyReviews.com.

Gillespie has also had the pleasure of sharing the biggest stages with some of the best comics in the country, including opening appearances for Dave Attell, Jim Breuer, Tom Segura, Kyle Kinnane, Tom Green, Harland Williams, Doug Benson, Emo Phillips, and Gilbert Gottfried.

Matt Cobos is a comedian and one-dude party. Based out of Denver, Colorado, he's opened for Nick Swardson, The Lucas Bros, Adam Cayton-Holland, and more. He has performed on the High Plains and Crom Comedy festivals, and was a finalist in the 2017 Comedy Works New Faces Contest. Matt Cobos is just a party dude with a party 'tude and he just wants to party with you. Hell yeah!